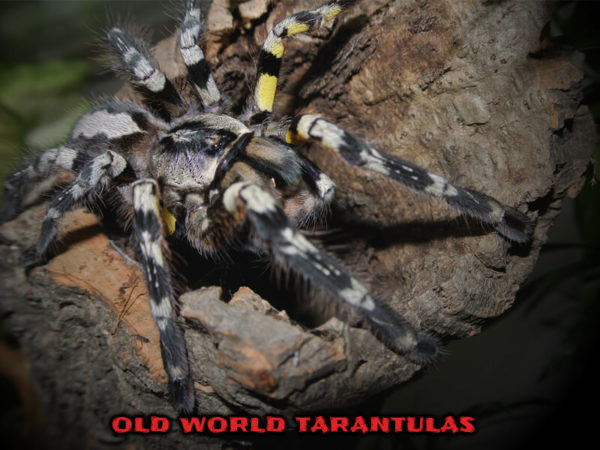 When speaking about the Old World Tarantulas, we are generally referring to species that originate from Africa, Europe and the East which are all considered to be a part of the “Old World” before Christopher Columbus and his cronies discovered the Americas.

Old World tarantulas / bird spider species and the below mentioned new-world species are recommended for experts / experienced keepers only. This doesn’t mean that a beginner can’t keep an old world species, but it significantly increases the chances of the hobbyist or the creature getting injured due to a lack of experience keeping and working with the old world species.

In general, old world species are far more unpredictable and move like lightning when the mood grabs them when compared to new world species. Stay safe, and only keep species that you are certain your level of experience can manage.

Bolty, nervous, skittish, defensive, aggressive – are all words that can be used to describe Old World Tarantulas. Although some specimens can grow up to be docile even when they are described as being demons – they are generally unpredictable in comparison to New World species. Some will just teleport across the room at top speed and others will hunker down and hope for any threat to pass. Others will bite and ask questions later, so always take care with old world species and above all – RESPECT THEM.

WIND: Remember that tarantulas have really poor eyesight and most of what’s going on around them is communicated via the various “hairs” and bristles on their bodies – so blowing on a tarantula is startling to them, especially the old world species. Think about it, when an animal comes grazing for food, it sniffs, huffs and puffs on the ground. Any sudden wind like this will cause a tarantula to either run and hide, or defend itself.

Old world species do not possess urticating bristles as a means of defense and must rely on their speed, camouflage, attitude or as a final resort, a nasty bite in order to protect themselves. Remember, most tarantulas have very poor eyesight, and can basically only see differences in light and darkness, all other senses are delivered via their sensory organs and bristles all over their bodies, so sudden shadows or light might startle them.

Some Old World Tarantula species will hunker down when they sense danger or are startled in the hope that they will not be noticed. If the threat persists, they may decide to bolt before showing any signs of defense or aggression. Other tarantula species will let you know immediately that they don’t want you in their space by displaying a threat pose when you simply approach the enclosure. This generally means they intend to defend themselves and will not hesitate to deliver a bite to a careless keeper.

A great example of this is Pelinobus muticus (The King Baboon) bird eating tarantula. They are known to immediately display the threat pose and bare their huge chelicerae (fangs) which in their specific case also possesses extra bristles on the insides of their fangs that they use to stridulate and produce what sounds like a hissing noise. Very intimidating to witness on a full grown specimen…

Unfortunately, there is no concrete scientific information yet as to how powerful tarantula venom actually is or how the venom from different species might affect humans, but in general their venom is noted to be far more potent than that of New World species with some being considered medically significant to humans. Bite reports from various forums around the world often describe bites being far more painful to endure, with added side effects as well.

Bites from Pterinochilus Murinus / Baboon Spiders for example, are noted to burn like crazy at the time of the initial bite, but then slowly fades, making one think the worst is over. However, days later, victims of a bite have reported getting sudden and severe cramps in different parts of the body, leaving one groaning in pain on the floor and unable to walk or move easily. Bites from Poecilotheria species like Poecilotheria regalis or Poecilotheria ornata have been reported to burn as though you have you arm dipped in boiling oil, also producing blisters on the skin closer to the bite location.

There is still a lot of speculation as to what would happen if someone were to receive a bite on the neck, in or close to main arteries. Here is a bite report where a worker was bitten on the neck by Stromatopelma calceatum (Featherleg Baboon) while working at a plantation: Featherleg Bite Report

Many people have reported going to the E.R. after a bite, but quite often, the hospital staff don’t know what to do and simply treat the bite like they would for a wasp or bee (tarantula and bee/wasp venom differ completely). The truth is, there is nothing they can really do except give you medication to help deal with the symptoms, like pain and possibly the cramping that certain species’ bites would cause.

Old World Species are not the only ones with potent venom. There are a few new world species that also carry potent venom and should be avoided by beginner hobbyists, like the Psalmopoeus species, here are some of the most popular in the hobby:

There are also some species of New World tarantulas that are tough cookies to deal with and also have a very defensive nature. Get to know your monsters, regardless of what they are generally described to be, because you just might have an exception to the rule. Many keepers have reported Grammostola rosea – Chilean Rose tarantulas, which are generally known as one of the best tarantulas for beginners – being as aggressive as any Old World tarantula in a bad mood.

AS A RULE: Always take care.