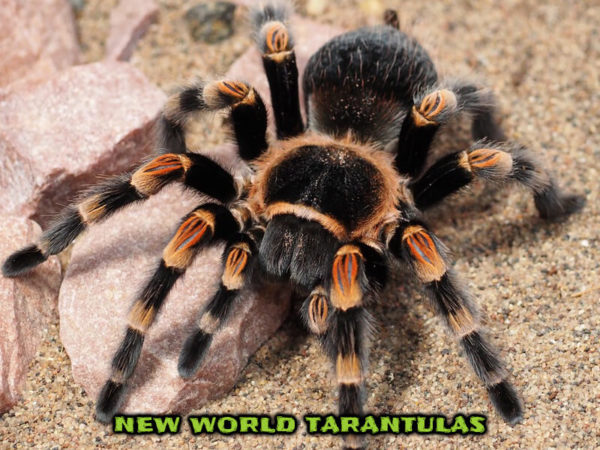 Please check out our “Beginner Tarantulas” for a list of tarantulas recommended for beginners in the hobby.

New World Tarantulas are generally considered to be more docile than any of the Old World species, with some being so docile that many keepers elect to handle them. However, just like everything in nature, there are some caveats / exceptions to the rule that should be looked out for. There are some species of New World tarantulas that are tough cookies to deal with and also have a very defensive nature. Get to know your monsters, regardless of how they’re described, because you just might have an exception to the rule.

Many keepers have reported Grammostola rosea – Chilean Rose tarantulas, which is generally known as one of the best tarantulas for beginners – being as aggressive as any Old World tarantula in a bad mood. Always take care and don’t forget to check out our “Beginner Tarantulas” listing.

WIND: Remember that tarantulas have really poor eyesight and most of what’s going on around them is communicated via the various “hairs” and bristles on their bodies – so blowing on a tarantula is startling to them, especially the old world species. Think about it, when an animal comes grazing for food, it sniffs, huffs and puffs on the ground. Any sudden wind like this will cause a tarantula to either run and hide, or defend itself.

New World Tarantulas have a secret weapon that Old World Tarantulas don’t have… Urticating Bristles. These bristles, often incorrectly referred to as “hairs” are barbed shaped bristles that occur in a patch on the rear of the tarantula’s abdomen, except in the rare case of Ephebopus murinus – Skeleton Tarantula, who’s urticating bristles occur on the chelicerae (fangs) and pedipalps of the spider. There are different types of these bristles, but we won’t get in to that here. Just make sure to respect these bristles, they can cause havoc.

Tarantulas will flick these bristles in the direction of any threat (using their hind legs) in the hope of neutralizing it. They also use them to line their webbing when ready to molt or simply as a deterrent to possible threats. When humans come in contact with these bristles, mild to severe itching will be the result depending on the species. Some people have very little reaction and others have reported breaking out in hives. The itch is excruciatingly addictive to rub and scratch and I’m not even kidding when I say it reaches levels of orgasmic euphoria when coming in contact with a hot surface like a mug of coffee if it’s your hands that are itching. Think I’m exaggerating? Wait for it…

NOTE: Every effort should be taken to avoid getting these bristles in soft tissue and especially your eyes, because should they become impaled in your eye, you may have serious problems that might include hospitalization in order to remove them. Always wash your hands after working in your tarantula enclosures and don’t carelessly blow air when cleaning or maintaining your enclosures.

Most new world species will flick these bristles and/or run away as a first defense. If the threat continues and the spider is continuously harassed, they too will rear their bodies up and display a threat pose, exhibiting their fangs. At this point, you’ve gone too far and the tarantula is now ready to bite.

Venom in New World species has also not been studied in depth and actual medical information on its effect in humans is basically non existent. However, people who have been bitten by New World Tarantulas have reported the venom to produce the same level of pain and swelling that can be expected from a bee sting, noting however that tarantula venom is COMPLETELY DIFFERENT to that of a bee and does not posses the same proteins at all. Tarantula venom and bee venom are completely different.

Tarantulas are also known to dry-bite, meaning they don’t always eject venom when biting. Remember also that the fangs of tarantulas / bird spiders are significant in size and a fair amount of pain will be caused by the puncture wound alone, leaving two fair sized holes and bruising at the location of the bite.

Old World Species are not the only ones with potent venom. There are a few new world species that also carry potent venom and should be avoided by beginner hobbyists, like the Psalmopoeus & Tapinauchenius species, here are some of the most popular in the hobby:

This website uses cookies to improve your experience while you navigate through the website. Out of these, the cookies that are categorized as necessary are stored on your browser as they are essential for the working of basic functionalities of the website. We also use third-party cookies that help us analyze and understand how you use this website. These cookies will be stored in your browser only with your consent. You also have the option to opt-out of these cookies. But opting out of some of these cookies may affect your browsing experience.
Necessary Always Enabled
Necessary cookies are absolutely essential for the website to function properly. These cookies ensure basic functionalities and security features of the website, anonymously.
Functional
Functional cookies help to perform certain functionalities like sharing the content of the website on social media platforms, collect feedbacks, and other third-party features.
Performance
Performance cookies are used to understand and analyze the key performance indexes of the website which helps in delivering a better user experience for the visitors.
Analytics
Analytical cookies are used to understand how visitors interact with the website. These cookies help provide information on metrics the number of visitors, bounce rate, traffic source, etc.
Advertisement
Advertisement cookies are used to provide visitors with relevant ads and marketing campaigns. These cookies track visitors across websites and collect information to provide customized ads.
Others
Other uncategorized cookies are those that are being analyzed and have not been classified into a category as yet.
SAVE & ACCEPT
Powered by

We're back online and will slowly be adding to our online shop again :) Dismiss